The combined power of three space observatories, including NASA’s Hubble Space Telescope, has helped astronomers uncover a moon orbiting the third largest dwarf planet, catalogued as 2007 OR10. The pair reside in the frigid outskirts of our Solar System called the Kuiper Belt, a realm of icy debris left over from our Solar System’s formation 4.6 billion years ago.

With this discovery, most of the known dwarf planets in the Kuiper Belt larger than 600 miles across have companions. These bodies provide insight into how moons formed in the young Solar System.

“The discovery of satellites around all of the known large dwarf planets – except for Sedna – means that at the time these bodies formed billions of years ago, collisions must have been more frequent, and that’s a constraint on the formation models,” says Csaba Kiss of the Konkoly Observatory in Budapest, Hungary. “If there were frequent collisions, then it was quite easy to form these satellites.”

The objects most likely slammed into each other more often because they inhabited a crowded region. “There must have been a fairly high density of objects, and some of them were massive bodies that were perturbing the orbits of smaller bodies,” says John Stansberry of the Space Telescope Science Institute in Baltimore, Maryland. “This gravitational stirring may have nudged the bodies out of their orbits and increased their relative velocities, which may have resulted in collisions.”

But the speed of the colliding objects could not have been too fast or too slow, according to the astronomers. If the impact velocity was too fast, the smash-up would have created lots of debris that could have escaped from the system; too slow and the collision would have produced only an impact crater. 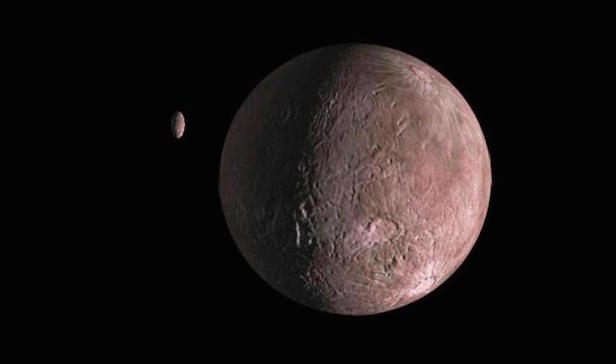 2007 OR10 is the third largest dwarf planet in our Solar System. Image credit: NASA

Collisions in the asteroid belt, for example, are destructive because objects are traveling fast when they smash together. The asteroid belt is a region of rocky debris between the orbits of Mars and the gas giant Jupiter. Jupiter’s powerful gravity speeds up the orbits of asteroids, generating violent impacts.

The team uncovered the moon in archival images of 2007 OR10 taken by Hubble’s Wide Field Camera 3. Observations taken of the dwarf planet by NASA’s Kepler Space Telescope first tipped off the astronomers of the possibility of a moon circling it. Kepler revealed that 2007 OR10 has a slow rotation period of 45 hours. “Typical rotation periods for Kuiper Belt Objects are under 24 hours,” says Kiss. “We looked in the Hubble archive because the slower rotation period could have been caused by the gravitational tug of a moon. The initial investigator missed the moon in the Hubble images because it is very faint.”

The astronomers spotted the moon in two separate Hubble observations spaced a year apart. The images show that the moon is gravitationally bound to 2007 OR10 because it moves with the dwarf planet, as seen against a background of stars. However, the two observations did not provide enough information for the astronomers to determine an orbit.

“Ironically, because we don’t know the orbit, the link between the satellite and the slow rotation rate is unclear,” says Stansberry.

The astronomers calculated the diameters of both objects based on observations in far-infrared light by the Herschel Space Observatory, which measured the thermal emission of the distant worlds. The dwarf planet is about 950 miles (1529 kilometres) across, and the moon is estimated to be 150 miles (241 kilometres) to 250 miles (402 kilometres) in diameter. 2007 OR10, like Pluto, follows an eccentric orbit, but it is currently three times farther than Pluto is from the Sun.